I was quoted in an article entitled “Bristol-Myers Squibb swallows last of antibody pioneers”, by Malorye Allison, in the September 2009 issue of Nature Biotechnology. The article focused on the monoclonal antibody sector, especially on the acquisition of Medarex by Bristol-Myers Squibb (BMS). The acquisition was completed on September 1. To read the article, go to http://www.nature.com/nbt/journal/v27/n9/full/nbt0909-781.html (subscription required).

In January, I gave a presentation to an RNAi conference, drawing lessons for the current therapeutic RNAi field from the evolution of the monoclonal antibody (MAb) field. This was discussed in a previous blog post, which focused on technological prematurity. In this blog post, we discuss the evolution of the MAb sector, how industry leaders emerged, and the acquisition of these leaders by large pharmaceutical and biotechnology companies.

MAbs are now the fastest-growing and most successful class of biologics. The majority of the MAbs on the market are indicated for oncology and inflammatory diseases. In 2005, MAbs accounted for 75% of antitumor biologics sales ($7.3B). Fueled by expanded indications and new products, MAbs are the major growth engine of the biologics sector, now and into the foreseeable future. Moreover, as we discussed in another previous blog post, leading biologics (all of which are MAbs) are on track to be the biggest-selling drugs in 2014. Large pharmaceutical companies thus have been seeking to acquire this highly successful class of drugs (including both marketed and pipeline MAbs), in order to fill their depleted pipelines and to make up for lost revenues due to current and impending patent expiries.

However, the MAb field was not always successful. Therapeutic MAbs went through nearly 20 years of scientific/technological prematurity.

The period of technological prematurity of MAbs lasted roughly from 1975 to 1994. Georges Köhler and César Milstein published the first paper on MAb technology in 1975, and they received a Nobel Prize for their work in 1984. The first MAb drug, Johnson & Johnson’s Orthoclone OKT3 was approved in 1986 for use in transplant rejection. However, this drug can only be used once in a patient due to its immunogenicity. There were not any further approvals of MAb drugs until 1994. The “deluge” of MAb drug approvals began in 1997, and has accelerated ever since. Prior to 1994, MAb technology represented great science, and it enabled researchers to make great strides in immunology, cancer research, the biology of HIV/AIDS, and other fields. (Some of this research was eventually applied to drug discovery, including the discovery of MAb drugs.) But during this period of scientific prematurity, any MAb drugs seemed to be in the distant future.

However, beginning in the early 1980s, several companies and academic labs began to develop enabling technologies designed to move this premature technology up the development curve. Among these companies were those that became the leaders In the MAb field.

The original MAbs were made via fusion of mouse B cells with murine myeloma cells, to create hybridomas. The MAbs secreted by these hybridomas contain all mouse sequences. They are highly immunogenic in humans, and are usually rapidly cleared from the circulation. They may also trigger allergic reactions and in some cases anaphylaxis. In order to create less immunogenic MAbs with the potential for efficacy and safety in humans, researchers used recombinant DNA technology to construct MAbs with mainly human sequences, but with the specific antigen-binding site of a mouse MAb. 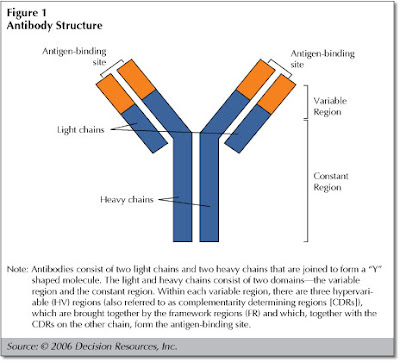 The progression of MAb technology resulted in the following classes of products:

Development of fully human MAbs required the invention of special technologies (phage display or the humanized mouse) that do not rely on mouse hybridoma technology.

The development of MAb enabling technologies began in the early 1980s (early within the period of technological immaturity of MAb drugs). For example, Genentech’s broad Cabilly patents (issued in 1989 and 2001) resulted from the company’s collaboration with academic researchers beginning in the early 1980s. But Genentech’s first MAb products, the antitumor agents Rituxan (codeveloped with Idec) and Herceptin, did not reach the market until 1997 and 1998, respectively. Both are highly successful drugs.

Over the course of the last several years, all of the public biotechnology companies that pioneered therapeutic MAb technology and become leaders in the field have been acquired. The acquisition of Medarex by BMS brings this process to a conclusion. 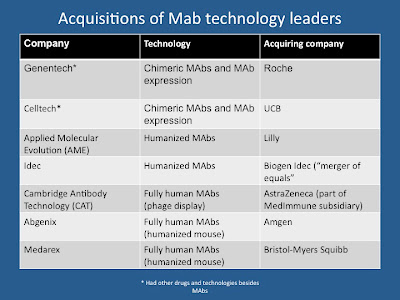 Are there any MAb companies that have yet to be acquired? The Nature Biotechnology article mentions several companies developing antibody conjugates, antibody fragments or antibody mimetics. However, there are also other still-independent firms that have developed proprietary technologies to produce full-length humanized or fully human MAbs. Among these are Facet Biotech (humanized MAbs), and Xoma, MorphoSys, BioInvent, and Dyax (all of which developed fully human MAb platforms based on phage display technology). Of these companies, Dyax is currently focusing on development of its proprietary non-antibody lead product, but also has a pipeline of proprietary research-stage MAbs and partnered research-stage and Phase I MAbs. The other companies are focusing solely on MAbs, and have pipelines of proprietary and partnered MAb drug candidates.

Of these companies, MorphoSys appears to have the strongest technology platform, and has used this platform to craft a unique business model that enables the company to be profitable even though it has not yet marketed a drug. Facet Biotech was spun out of PDL BioPharma last year. PDL, formerly known as Protein Design Labs, is a pioneer in humanized antibody technology, whose technology was used in the development of Genentech’s Herceptin and Avastin. In August 2009, Biogen Idec made an unsolicited offer to acquire Facet, which Facet rejected; the attempt of Biogen Idec to acquire Facet is still ongoing. Biogen Idec has been Facet’s partner since 2005, and the two companies have been codeveloping daclizumab, an anti-IL-2 receptor agent for treatment of multiple sclerosis (currently in Phase II clinical development), and volociximab, an anti-angiogenesis agent for treatment of solid tumors (also currently in Phase II). Except for Facet, none of these companies appears to be a near-term acquisition candidate.

Nevertheless, large pharmaceutical companies are continuing to work on building franchises in biologics, with an emphasis on MAb drugs. This is, for example, a factor in the Merck-Schering Plough and Pfizer-Wyeth mergers. Schering-Plough has had MAb alliances with such companies as MorphoSys and Xoma, and acquired Dutch company Organon (which had a collaboration in MAbs with Dyax) in 2007 in part because of its capabilities in biologics. Merck also acquired GlycoFi in 2006, for its capabilities in yeast-synthesized MAbs and other biologics. The newly merged Merck plans to make biologics a major focus of the company. Similarly, Pfizer acquired Wyeth in part because of its strength in biologics.

Thus, the acquisitions of the leaders in MAb technology represent an important part of a larger picture, the growing emphasis on biologics in large pharmaceutical companies, which have traditionally relied on small-molecule drugs.